In search of quirks, Kobe ho.

The first half of 2010, I was heavily bearded and deeply entrenched in the unending mental wasteland that is studying your major for the first time in a different language for admission exams (I recommend such exam study for achieving fast fluency, don’t recommend it for mental health). The latter half of ’10 was my first semester as a regular (3rd year) student at a Japanese university, which had me studying to edge my way up to the top of the honors list to secure scholarships. From there, I took on a number of finance-related certifications, presently plugging away relentlessly at the long-haul CFA Level 1 prep...

Anyways, the reason for this blather is because I recently noticed that while when I first got to Japan I went to Kobe all the time, as I’ve become increasingly busy, since late 2009 I believe I’ve only gone three times.

This is embarassing, and something I hope to adjust in coming months (though not all that hopeful). The atmosphere is totally different than that of Osaka and Kyoto. While it looks and feels unique during the day, it’s really when you get out and about at night that Kobe’s interesting folks come out.

A couple Saturdays ago armed with cameras and false confidence that we knew anything about art, we spent a solid day in Kobe and paid a visit to the Biennale （ビエンナーレ） which while extremely awkward to pronounce in Japanese is I believe the Italian pronunciation of biennial. All areas I’ve been numerous times before and know well, but this time at a pace where we could really take in the flavor of various neighborhoods.

It’s always a pleasure getting to Osaka station before the odorous crowds fill it up.

In what is a bit of a reversal of typical routes, we took the train all the way down to Kobe station, and over the course of the day worked back up to Sannomiya. 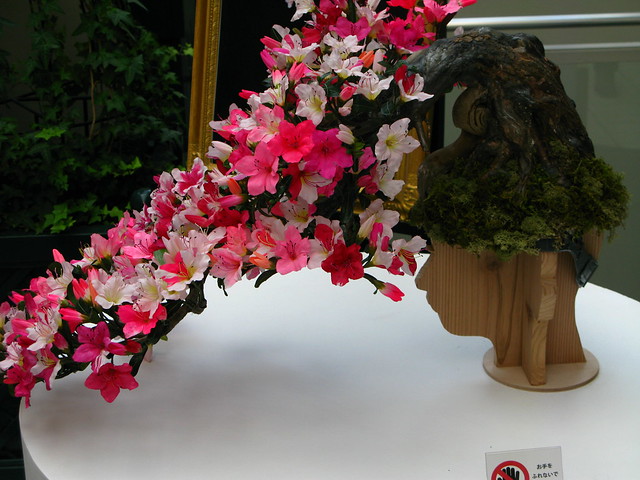 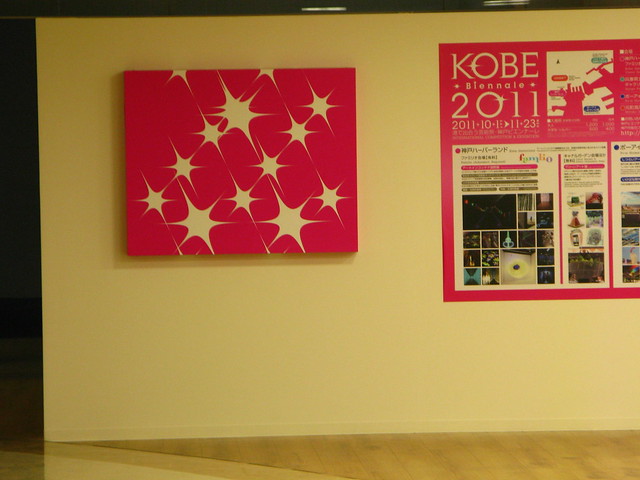 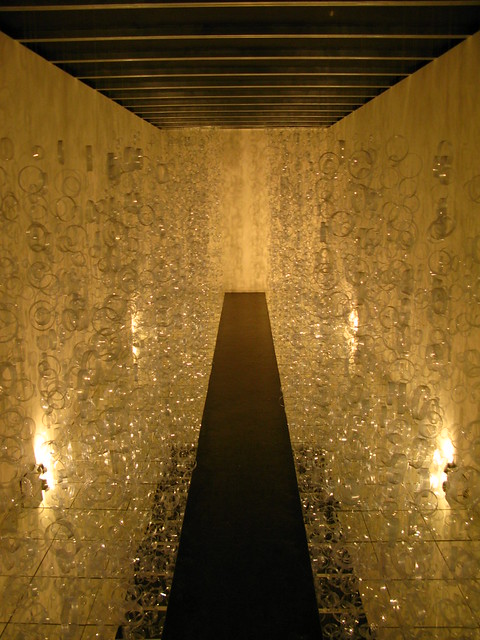 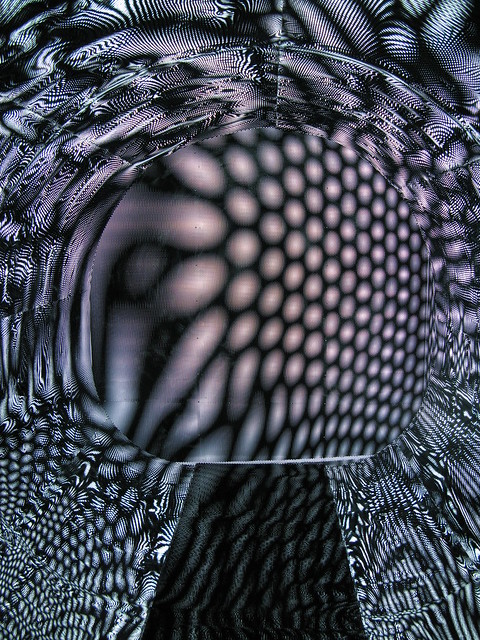 I saw this next one on おは朝, and while the wall decorations were quite excellent, interacting with an animated urinating monkey with two other moderately excited strangers was less fun than it looked on TV. 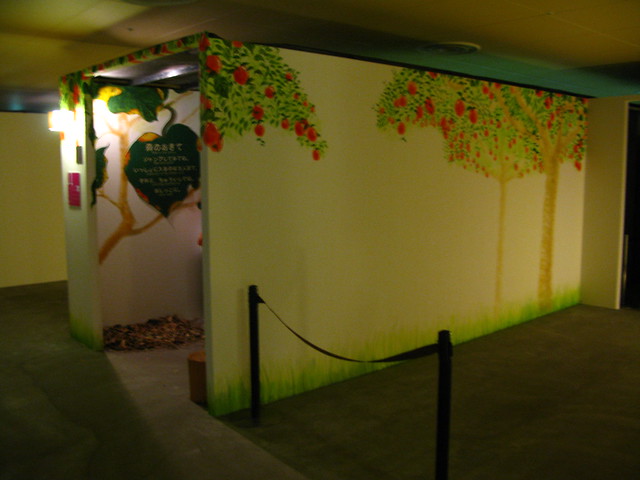 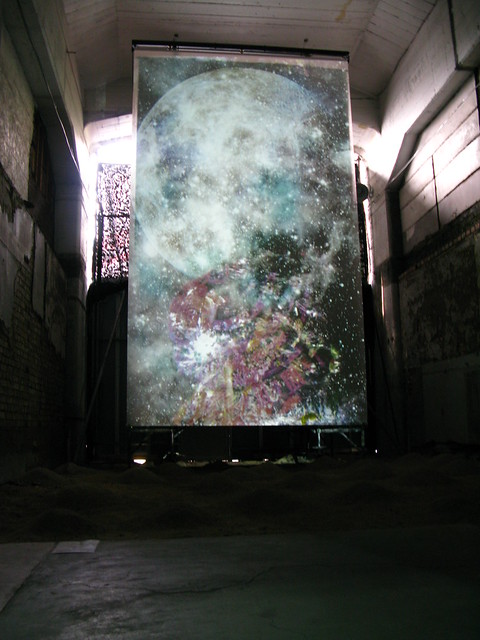 We then headed out along one of the most interesting areas you will find anywhere in Japan: motoko, namely the shopping arcade running under along the train line stretching from Motomachi up towards Sannomiya. 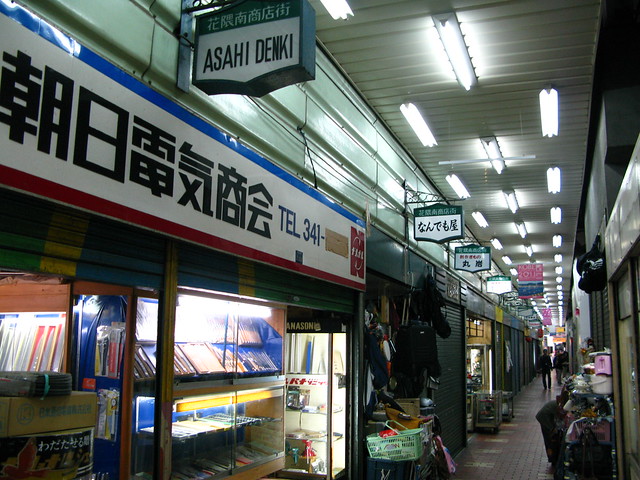 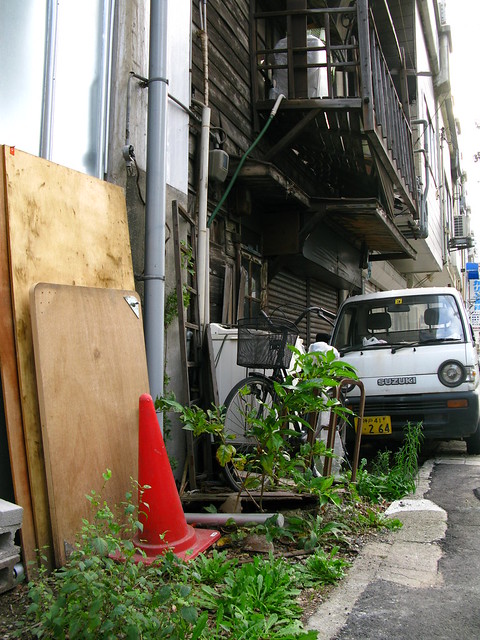 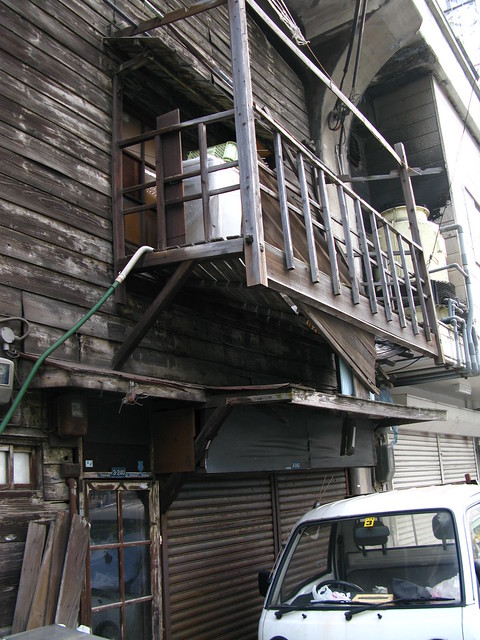 It's jammed with shops, some new shops with young entrepreneurs tackling interesting, unique businesses, but for the most part the shops are archaic clothing or electronics stores, that probably haven't seen any real consumer presence since late Showa. From the looks of it, most of the shopkeepers selling ancient typewriters and tape players as if they were the latest items to hit store shelves, are living in their own tiny economic bubble which has remained frozen since probably the late 1980s.

There's no way an outsider is getting in that community, but were it possible, I would love to do some research on the economy of that area. I honestly would not be surprised if the old guys "running" the shops were on a near-100% barter system with each other. Socks for bananas, "new" TV cables for shoe repair, and the like. Really, a truly fascinating example of how a single section of a developed economy can freeze and in some sense devolve.

Many sit around fiddling with old Famicoms and prehistoric television antennas, waiting for customers I cannot imagine will ever come, save for the occasional novelty purchase. I saw an ad for renting the space around there, I believe it was in the Y40,000 - Y60,000 range. I assume the old shopkeepers must own the properties, because even that student-grade revenue is unthinkable!

See my point: the store whose merchandise appears to be... garbage. 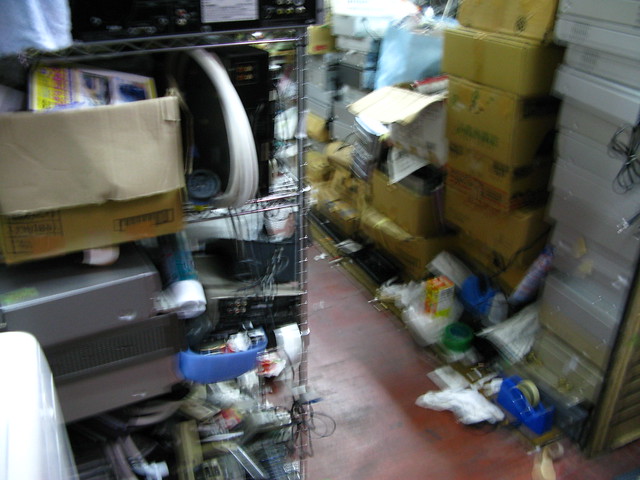 This exhibit was great. By tweeting "triplicata", your message was almost instantly projected in an interesting way on the screen. 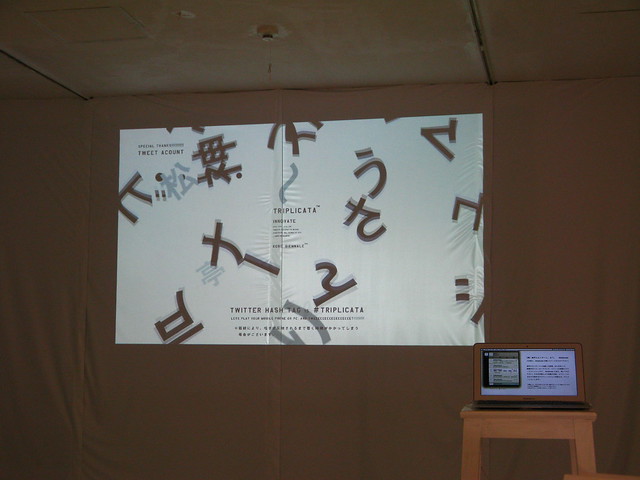 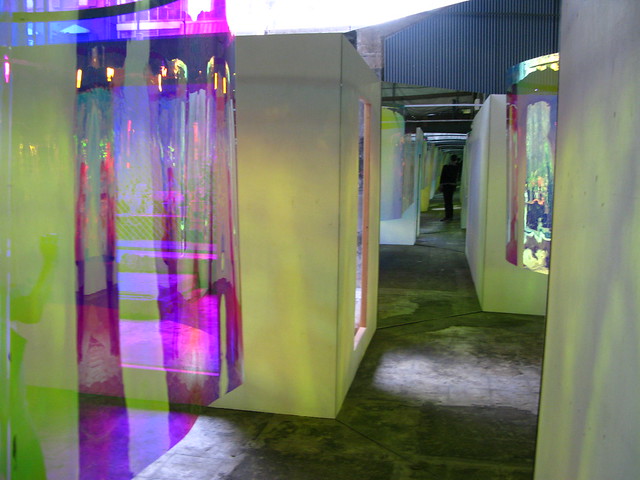 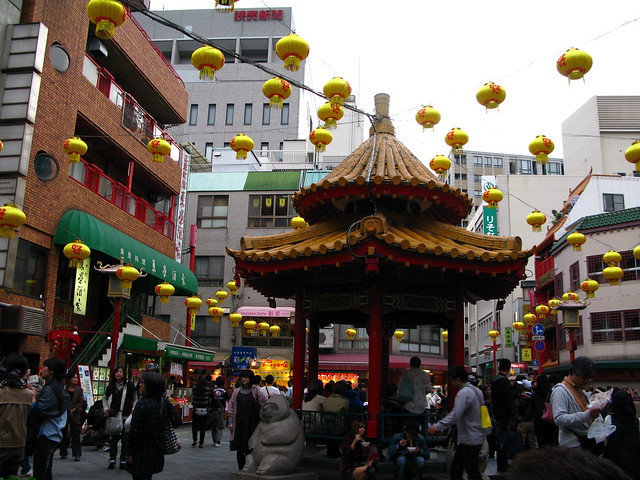 We eventually made it back to the heart of Kobe, after stopping by my favorite liquor store, the Co-op near the Hyogo Prefecture building. Fueled up for some fun wandering, enjoyed the lovely shops, and... 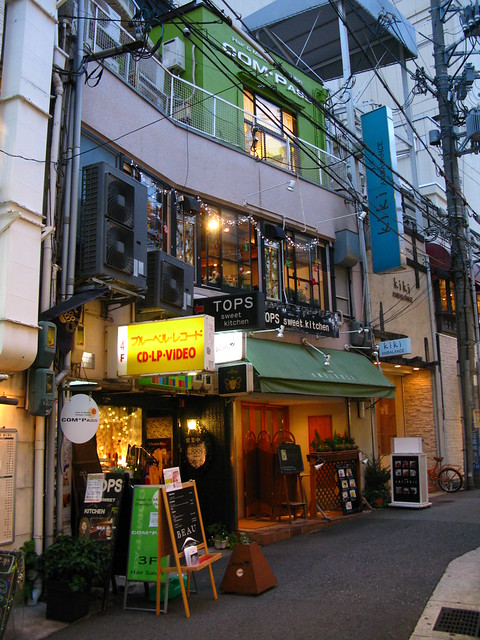 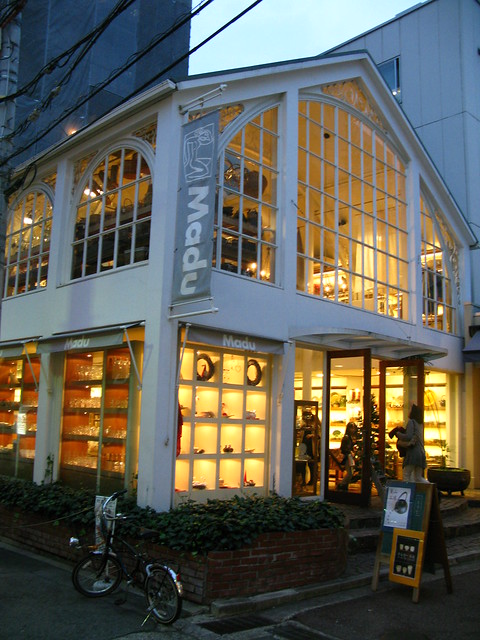 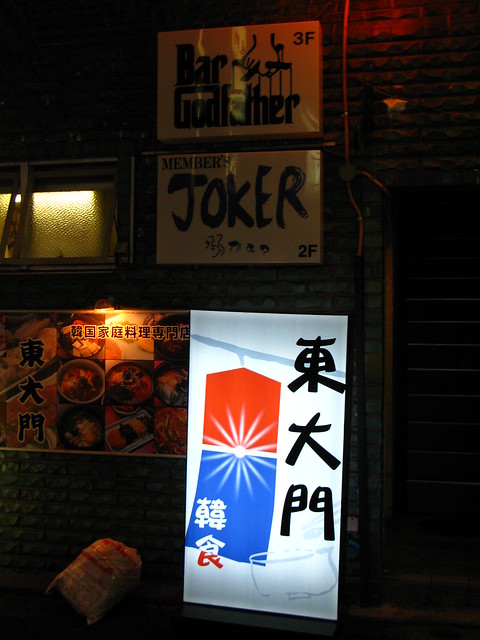 ...a nice little bit of racial discrimination by the nation's sex industry. I could faintly see the "guards" near the entry desk, so as we chatted outside I made sure my discontent was clearly overheard. All in all a wonderful day. Hope to get back out there soon. 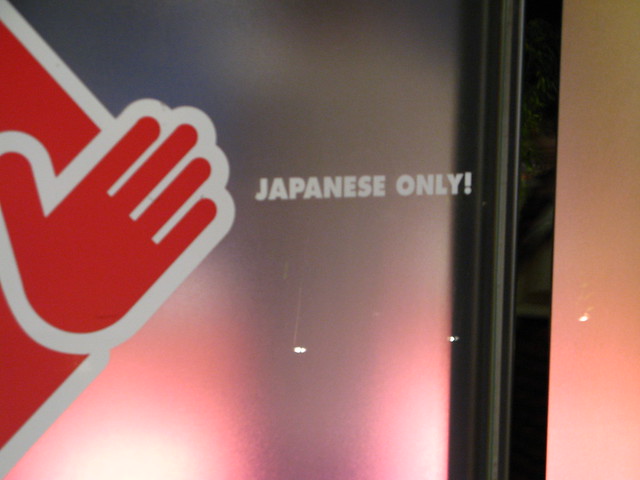